A very common chemical allergy or sensitivity is a reaction to “Fragrance.” This can take the form of an asthmatic reaction, a tight throat, a runny or stuffed up nose, hives, a rash, dizziness, or even something entirely different.

Fragrance can trigger both sensitivity and allergic reactions.  Usually fragrance does not contain proteins (allergy is considered an immune response to proteins), so immediate reactions are mostly sensitivity and irritation, such as an immediate asthmatic reaction stemming from already inflamed tissues becoming more irritated. The true allergy occurs when the fragrance molecule binds with proteins on our skin and in our nose/sinuses and lungs, which gives a delayed immune response rather than an immediate reaction.  Regardless of the nature of the reaction, both forms can cause serious harm.

A fragrance is any molecule or substance that causes the average human nose to detect an odour. I have to say “average human nose” because some noses and brains are odd. My mother in law can’t smell skunks – lucky her! When we smell an odour, molecules of the substance travel into the back of our nose and are captured by special scent receptors. These receptors send electrical signals to our brain. Our brain decodes the signals and tells us what we’re smelling.

This is a pretty broad definition, and indeed the category “Fragrances” is a very broad one. To a manufacturer, a fragrance is anything that can be added to a product to change its smell. Most times the exact chemicals used are considered proprietary, and manufacturers aren’t required to tell us what they are. The term “fragrance,” whether natural or not, can refer to thousands of chemicals! Even products labelled “fragrance-free” can contain some fragrances and scent masking agents to hide the smell of detergents and other ingredients. Fragrances are everywhere.

A patch test usually contains somewhere between 25 and 150 allergens, and only some of these are fragrance patches. So how do doctors test us for sensitivity to all of those chemicals? They don’t. The fragrances most likely to cause a reaction are tested individually (like Balsam of Peru), and other less common but still likely fragrances are tested in groups, listed as “Fragrance Mixes.” Each fragrance mix contains a number of different chemicals used as fragrance in manufacturing. Testing positive to one of these patches means you are allergic to somewhere between one and all of the fragrance chemicals on the patch.

When I asked my allergist if they could then test the eight fragrance chemicals on the patch to determine what I was allergic to, I was told that they would not be willing to do this. Their allergen mixes only last so long, and buying individual chemicals would be cost-prohibitive for them. This is like your doctor saying, ” You are allergic to one or more citrus fruits. I can’t tell you whether it’s one, more than one, or all of them, so just avoid them all,” and you can’t go buy citrus fruit for yourself to test on your own. You may only be allergic to lemons, but now you must avoid all citrus fruit lest you react. Fragrance mixes are similar. You may only be reacting to one chemical, but with a positive test to a fragrance mix and no further testing, you must now avoid all of these chemicals. 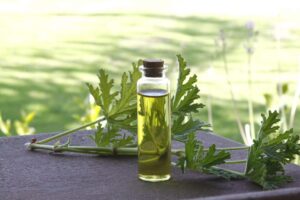 Even essential oils contain often the naturally-occurring chemicals found in fragrance mixes, meaning that natural products in which you can identify the source of every ingredient may not be better. With no requirement to list which fragrance chemicals are used in commercial products, and natural products being no better, fragrances are nearly impossible to avoid unless you make your own products (and stay at home). In this case, the best weapons are avoidance, preparation, and after-treatment

Have you tested positive for sensitivity to fragrances? Were you able to get clarification about which fragrances were a problem for you? Comment below.